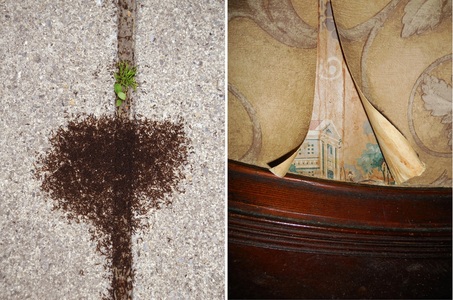 Curator Ellen Wallenstein says of 'Notes in Passing (Ants/Wallpaper), "A sophisticated pairing, two disparate images each seen from a different viewpoint that connects visually and viscerally. A very quirky pair."

Julie Mihaly says, "These images are from a project titled Notes in Passing, a visual record of places and things that most people would never notice, let alone record.

The images, taken with a tiny point-and-shoot camera and printed quite large, are of the everyday and mundane- undemanding little realities that might register peripherally, but are rarely granted head-on recognition and certainly not flat-out esteem.

Seeing these things, framing them in a way that satisfies a need for order, and then sharing them is an almost embarrassing delight. The joyful reverence behind their creation seems to translate into a sense of silence and solitude in the pictures, despite the fact that many of them were made on noisy city streets. But no matter what their locale, these notes gently, but firmly and consistently demand to be taken."

After earning a BFA and MFA from The San Francisco Art Institute, Julie Mihaly taught photography at Rutgers University, The Nova Scotia College of Art and Design, and New York’s School of Visual Arts after which she also turned her hand to photo editing and research.

She has worked for magazines ranging from Vanity Fair to Vogue, In Style to Entertainment Weekly, Garden Design to Billboard, et al. She has also contributed her skills to projects that include an Al Gore documentary and a book of images by Pulitzer-Prize-winning photographer, Eddie Adams.

Mihaly has exhibited her photos throughout the U.S., in Canada and in England, and has had four books of her imagery published- She Began to Realize (funded in part by a grant from the National Endowment for the Arts), The View From Here, Radius: One Year Five Miles, and most recently, The Attic. Mihaly currently lives and works in Poughkeepsie, NY.