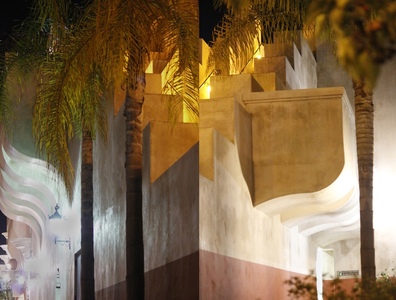 Curator Ellen Wallenstein says of Alley Fusion, "Two photographs that take you around a mysterious corner. While they don’t mesh exactly, the middle third becomes interesting on its own."

Janice Tieken says, "I graduated from Otis in 1974 when photography was 'not art' according to the dean of that day but I pursued it anyway along with other mediums.

I was attracted to the camera for its ability to capture what purports to be reality but is illusion. Like a Zen conundrum something may be at once true and untrue.

My concern for this duality of perception – truth vs illusion – is revealed by reflecting images that may initially project a mood of tranquility and secondarily an edge of starkly real or surreal. The subjects may be living or dead, flora or fauna, fragments focused close up for an exaggerated intimacy, or simply the absurd as found in the juxtaposition of disparate elements.

Abstract realism might best describe the simplicity of composition that belies the complexity of the whole as discovered on closer inspection.  Every photograph incorporates a story, perhaps a mystery, drawn in part from the viewers’ experience in concert with mine.

The surreal elements mirror the reality of our lives as indecipherable.  Recent work pushes the notion that all is illusion, with indistinct figures and objects. One new body of work is based on reflection, literally and figuratively, as well as focusing through windows, melding the outside and inside.
A series of diptychs, triptychs and more, bring together places and times fancifully in the mode of quantum physics: that all things happen at once.

I have always thought of photographs, whether altered or as found, to be a form of painting.