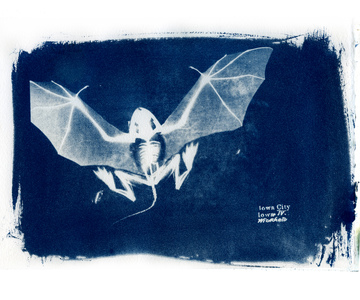 Curator Anne Eder says, "Andrew Repcik’s series of blue images references the origins of monsters in the natural world and human intervention as a means of gaining power over nature.

Repcik’s statement says that the work is inspired by a 20th century Russian scientist, Dzhon Dou. It triggers connections to archived stories of genetic engineering, mutations, Frankenstein, The Island of Dr. Moreau, and other examples of human overreach resulting in the creation of the monstrous. The use of cyanotype pairs the printing method with the historical time frame, providing a concise syntax."

Andrew Repcik says, "These images are inspired and directly related to the works of the early to mid 20th century Russian scientist Dzhon Dou.  Although the communist party purged formal records of his work, I have recreated his experiments, here, through various notes and eyewitness accounts that have been saved.

My goal with this body of work is to take examples of extreme instances of experimentation and use them as a base to show humanities lack of discretion in applying morality to our actions.  Through these examples I want the viewer to consider how we will move forward into a new world where the potential exploitation of genetic engineering, cloning and other emerging technologies challenge our ability to remain within respectable boundaries and not delve into our own version of The Modern Prometheus.
The framework for these images comes from the work of Dzhon Dou.  He spent his early career working in the field of eugenics under the guidance of fellow Soviet scientist Lurri Filipchenko at the Petrograd center for genetic research.  Dou established himself not only as an emerging scientific mind, but also as a staunch supporter of the communist party.  Records show his membership in the Russian Eugenic society, which was founded in 1920 but disbanded by 1930 due to untenable goals.

The early 1930’s saw his introduction to Vladimir Demikhov who’s work included dog head transplants, the creation of two-headed dogs and new organ transplant techniques.  During this period Dou worked under the authority of Demikhov learning surgical practices and assisted with experiments.  Dou appears to have become interested in the works of ILya Ivanovich Ivanov, who specialized in the field of artificial insemination and the interspecific hybridization of animals.  Ivanov’s work culminated in his controversial attempts to create a human-ape hybrid.

During the late 1930’s Dou shifted his focus to the creation and modification of animals.  Indications are that during the period of W.W.II he was granted latitude and support from the communist party to experiment with grafting, transplantation and artificial insemination on various animal species.  Using information recovered from Nazi and Japanese experiments Dou grew his practice in both scope and scale after the war.  Working in relative obscurity he was able to produce a prolific body of work with little scrutiny.

While Demikhov produced results that were shocking, Dou seems to have produced no viable specimens.  His legacy is one of failures.  What you see is not a celebration of his failure, but rather a reminder and a warning as to where we might be headed as our technologies edge us closer to a realization of the Frankenstein scenario.

I have attempted to create a fictitious scenario, that is rooted in actual historical instances.  I present this as though it is real in an attempt to obscure notions of truth and fiction, in our understanding of what is moral and/or ethical."

Andrew Repcik was born in Northern California, where he was introduced to what many would consider a rural background.

He learned the value of animals as well as self reliance and hard work.  As he grew he was introduced to a world of travel that led to his relocation from state to state through his teen years.

This movement allowed him to see different aspects of America, its people, landscapes and cultures.  During this period he also found a love of books, music and photography.

After graduating high school Andrew had the opportunity to pursue music and tour throughout the U.S.  This period provided the catalyst that led him to Washington State University, where he attained a B.A. in (Pre-Law) Philosophy.

Working in traditional occupations following graduation, Andrew felt unsatisfied and longing for a creative outlet.  This drive led to his reintroduction to photography.

Becoming a vehicle for discovery and a catalyst for understanding the world around him, the camera became an indispensable companion on his travels and adventures.

Reigniting this passion led to commercial photography endeavors and eventually his relocation to Santa Barbara to attend Brooks Institute where he has expanded his body of work into a creative narrative that explores the moral and ethical values of our society as we enter into a new world of scientific discovery. 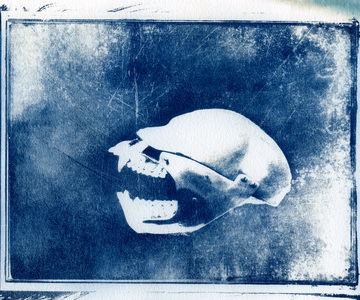 RESTRAINT by Andrew Repcik
(Click on image for larger view) 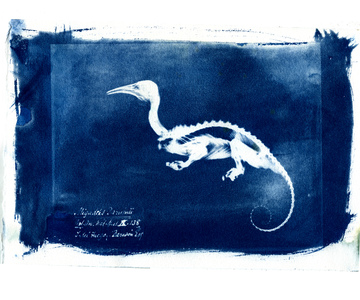 
Home for 'Monsters' including message from Anne Eder:
www.nyphotocurator.com/monsters-anne-eder