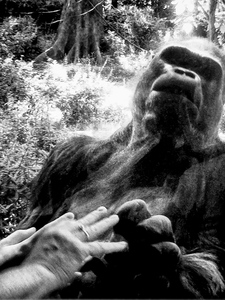 Review by curator Fran Forman: "Donna Bassin’s Gorillas 8 is both heart-breaking and poignant.

An older woman’s hards reaches out to touch the gorilla but is separated by glass.

There is a sense of Michaelangelo’s painting in the Sistine Chapel, where God’s hand reaches out to touch Adam’s, but in fact, their touch is separated by an invisible force.

In this image, the gorilla and woman attempt to touch and feel each other, but like a visitor to a prison, physical touch is impossible; the barrier is invisible and harrowing.

The gorilla’s expression is enigmatic, but suggests to me a longing for contact. His species is almost extinct, and although he is safe in his enclosure, his loneliness is palpable.

The backward bend of the gorilla presents a strong diagonal in the composition, further suggesting his vulnerability and eventual demise.
www.franforman.com

Questions for Donna Bassin from Forman: "The gorilla’s expression is unclear, but his hand reaches out to touch the woman’s. Who is the woman? Who is the gorilla looking at? The person holding the camera? What were your feelings when you took this photo? What do you think the gorilla was thinking? How would you feel if, in fact, you were able to physically touch this animal?"

Bassin says, "I captured on film what appeared to be, from my human perspective, a genuine encounter between a fellow unknown visitor and a silverback gorilla at the meandering glass edge in the Bronx Zoo’s Congo Gorilla Forest.

I could imagine the woman,  deeply moved and awed, as I was, by the gorilla’s desire to respond to her interest and curiosity by a reciprocal touch of fingertips.

The glass separated them, as well as protected them from their difference.  I recall that this massive gorilla with his head slightly tilted back and his five-fingered hand reaching out was calm and gentle as he approached the edge of their connection.

I could not see the eyes of the gorilla nor imagine what he felt, but the gesture of call and response between two hands was familiar as a sign of intimacy.  How dare we assume domination and place them in captivity."

Additional review by curator Julie Williams-Krishna: "Reaching across time and species to connect – our very evolution is visible in this captivating image of a gorilla reaching towards a woman’s hand by Donna Bassin. My first thought upon seeing the image took me to the heady experience of watching King Kong as a pre-teen at a slumber party and the awe and fear that came with that story. I watched a recent remake in which this jungle giant was entertained by a spirited woman who found a way to make him laugh and feel. Bassin’s image brings to mind that tender and tenuous connection.
For me, the light surrounding the gorilla takes us to another dimension, one where we are not separated into human and beast, one where we can be together in harmony. We are all stardust, after all. The gap between their hands represents the evolution of time, and the urgency of preservation, and the spiritual space in which we can connect. The gorilla, tipping backwards as if in…  fear? recognition? Is he about to laugh? I feel he may just be about to speak tenderly of a time remembered. Reaching towards each other with curiosity, perhaps there is long-lost love swirling in the stardust. And there is that diamond hard-promise, made under a different pretense, reminding us to preserve what we share."
www.jwkphotography.com

Additional review by curator Ellen Wallenstein: "Donna Bassin’s black & white photograph of a gorilla reaching out to a human who is reaching out to him is very affecting. Of course one immediately thinks of the movie “King Kong”, (either the 1933 version with Fay Wray or the 2005 version with Naomi Watts). Both movies fictionalize the relationship between beast and woman.

The animal looks pained here, and perhaps a bit sad. There is a sense of trying to connect from both sides of the glass. Since humans and gorillas share 98% of DNA, this “natural encounter” is a throwback to our past interconnections. It is also a sad comment about the present captivity of these ancestral animals.

I like the perceived immensity of the tree trunk in the background behind the gorilla, in what seems to be a “natural” zoo environment. The animal is surrounded by a halo of light, which enters the photo from the top right and flutters downward, in opposition to the energy of the human hands moving into the frame on the left. The two energies meet at an invisible boundary, which one assumes is glass in a caged zoo environment. Both seem to want to connect and understand across that invisible boundary. We are outside looking in; the gorilla is inside trying to connect but not making eye contact. It is in his gesture- the head thrown back, the eyes looking beyond us- that the picture grows and stays in ones visual appreciation."
www.ellenwallenstein.com

Donna Bassin says, "I bring the urgent project of transforming relationships of domination to a day at the zoo.

The interrogation of the human=animal dualism illuminates relational moments of mutuality across species. Managing the tension between sameness and difference without collapse into a hierarchical configuration, the human-animal connection may take its place in the project of transforming relationships of domination and extending the circle of ethical care.

Work within the field of animal studies has suggested that the interrogation of the human=animal dualism is a necessary condition for all ethical questions.
For much of my life, I have related to animals as objects—objects of entertainment, education, food, and clothing—even pets I cared for were objects of my subjectivity. And as for many of us living in the Civilized Western world, other than occasional sightings of rogue animals trespassing human space, or visits to the zoo, animals were a  small part of my social world.

Life in progressive zoos for apes and certain monkeys has changed. No longer displayed in cement cages with painted faux replicas of their native habitat and visitors, animals at the Bronx Wildlife Conservation Park are increasingly housed in some recreation of their natural habitat. Gorillas live and freely roam in a 6.5-acre natural lowland rain forest. Built inside and snaking within the gorilla habitat is the human habitat—a mostly glass tunnel-shaped and climate-controlled enclosure, complete with toilets, benches, and educational material.

It is along this meandering glass edge, where animal and human habitats intersect, that theoretical commitments to the deconstruction of the unethical master-slave dichotomy may be usefully employed and the radical vision of transformed relationships, even across species, might be briefly enjoyed.

Despite the language barriers between the human visitors and the gorillas, instances of call-and-response through gesture and gaze define cross-species encounters. Gorillas, no longer mere passive captives, become active subjects initiating and responding to attempts of attunement and assertion."

Donna has held multiple solo exhibitions in the Montclair area from 2003 to 2017, beginning with The Afterlife of Dolls at the Montclair Art Museum. She has also participated in numerous group exhibitions ranging from New York to Los Angeles. Her award-winning documentary, Leave No Soldier (2008), has been screened at various film festivals in the tri-state area.The Mourning After (2017), her most recent film, has been awarded the prestigious Gradiva Award.

Career Highlights: Professional psychologist and filmmaker - directed and produced two documentaries: "Leave No Soldier" in 2008 and "The Mourning After" in 2016-2017, both of which have received Gradiva Awards from the National Association for the Advancement of Psychoanalysis. I have also had several photographic shows since 2003 starting with "The Afterlife of Dolls" at the Montclair Art Museum in Montclair, New Jersey.