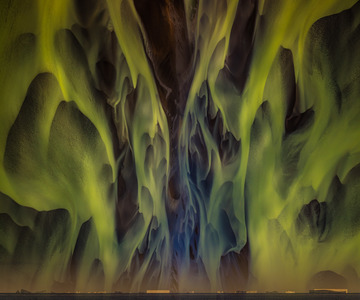 John Paul Caponigro says about his series, 'Global Warning - Antarctica', "The images in my series Global Warning are both visualizations of invisible greenhouse gases and metaphors for the negative emotions we are deluged with on a daily basis. Solastalgia, climate grief, and eco-anxiety are contemporary complexes that continue to intensify and deepen with every year that passes.

Living in the anthropocene, the sixth great age of extinction, we find deserts and industrial wastelands spreading at alarming rates, plastic in the rain, and a rising tide of diseases exacerbated by toxic waste. We pay big prices, both externally and internally. It’s difficult not to feel like we are the problem and solutions seem too few, too slow, or too insignificant. It’s challenging not to retreat into denial. It’s hard not to go numb.

Rather than repressing these feelings, these images provide a form of freeing catharsis, at first difficult to digest but ultimately clearing space for something more restorative to fill the voids they point too. Things are much worse than we thought and not as bad as we can imagine. If we heed the wake up calls that exist all around us, we will be able to find ways to live more harmoniously with our environment and ourselves.

The scope of this series is global but the first images to be released in it are drawn from Antarctica, the earth’s great climate regulator where ninety percent of the world’s ice acts as the earth’s refrigeration unit, driving ocean currents, and so the weather of the world with it.

Drawing on rich family heritage and rigorous academic training, John Paul Caponigro creates synergy between a variety of media including painting, photography, video, sculpture, and writing.  A form of environmental art in virtual space, his art is about the nature of perception and the perception of nature. His life’s work rekindles our awareness that we are not apart from nature but rather a part of Nature.

John Paul is a pioneer among visual artists working with digital media. He consults with the corporations that build the tools he uses including Adobe, Canon, and Epson. A member of the Photoshop Hall of Fame, his work is published widely in periodicals and books including Art News and The Ansel Adams Guide. His work is exhibited internationally and purchased by numerous private and public collections including Princeton University, the Estée Lauder collection, and the Smithsonian.