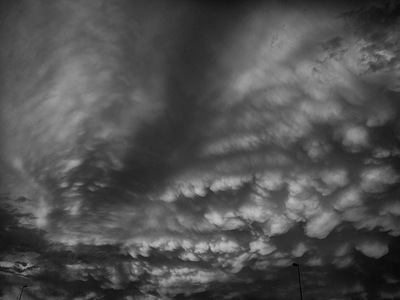 DECEMBER 23 by Jared Ragland
SECOND PLACE
December 23, 2015, 4:44 p.m., before our last Christmas together.
(Click on image for larger view)

Jared Ragland says, "As an homage to Alfred Stieglitz, the father of modern photography and creator of the renowned series of cloud pictures he first titled Songs of the Sky and later came to call Equivalents, I created a project-specific Instagram account in which I photographed and posted a picture of the sky nearly every day for an entire year.

Just as Steiglitz’s cloud pictures were imbued with a symbolist aesthetic, and over time became increasingly abstract equivalents of his own experiences, thoughts, and emotions, so too did my pictures assume symbolic weight and personal meaning as the year passed.

Shortly after beginning the project on the Spring 2015 Equinox, my mother was diagnosed with terminal cancer, and the act of making these images quickly took on a kind of liturgical significance.

Each picture became a brief meditation, a prayer, for mom as I marked the passage of another day and considered the nuances of light, space, form and texture overhead.

The entire series can be seen at instagram.com/eequivalentss.

He is the photo editor of National Geographic Books’ "The President’s Photographer: Fifty Years Inside the Oval Office" and has worked on assignment for NGOs in the Balkans, the former Soviet Bloc, East Africa and Haiti.

In 2015 Jared was named one of TIME Magazine’s “Instagram Photographers to Follow in All 50 States” and in 2017 was awarded an Alabama State Council on the Arts fellowship.

His work has been featured by Forbes, The Oxford American, and The New York Times and he has exhibited internationally with recent shows at Candela Books + Gallery in Richmond, Va., the In/Out Transylvania Foto Festival in Cluj, Romania, The National Geographic Society, Birmingham Museum of Art SHIFT space, Huntsville Museum of Art, Montgomery Museum of Fine Arts, Mobile Museum of Art, Rayko Photo, the Los Angeles Center of Photography, Click! Photography Festival, and Filter Photo.

Jared is an alumnus of LaGrange College and a graduate of Tulane University with an MFA in Photography. He resides in his hometown of Birmingham, Alabama.