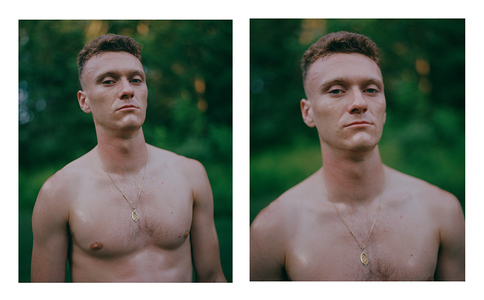 Review by curator Frances Jakubek:
"Christian, Twice” by Joseph Caster evokes the discomfort of making eye contact long enough to witness a change in expression. Are we supposed to look away now? What happens if we don’t?

This diptych is a strong example of the viewer/photographer/subject relationship. Initially I feel pushed away by the subject’s grimace, but as Joseph moves the lens, Christian becomes warmer. The sitter now wears a sort of Mona Lisa smile, approving movement toward him. I wonder what the interaction was during the time between making the photographs. I can feel the vibration of vulnerability in the blank space bound by the two frames.

The decision to include two images allows for more room to become acquainted. Creating a sequence invites the viewer to take their time, and revisit the first glance if they want to. Sometimes it is hard for me to to feel connected with strangers portrayed in photographs and that undoubtedly has to do with my own self-consciousness. What this image pair does for me is invite the opportunity to look again and shed a layer of my own ego by keeping eye contact."

Jakubek asks, "So glad to be introduced to your work, Joseph. How did portraiture become part of your practice and how does self-consciousness play a role?"

Caster says, "When I first started making photographs, I knew I always wanted to see other people in them. I have an immense interest in the job of “modeling” and what it means to become a model for someone. I always wanted to turn my friends and people around me into my models, to have them take on that role. Making portraits, whether of myself or those around me, let me know what it’s like to take part in beauty. I especially like working with other men in my life, because as boys, we are often taught that beauty isn’t meant for us, which isn’t true.

Thinking on the self-conscious, what does it mean to see yourself in an image? To become this beautiful and strange version of yourself, to feel as if you are validated, I always think of Mickalene Thomas saying“To see yourself and to have others see you is a form of validation”.  When we model, who do we model for? For ourselves, or for someone else? This is always the question I ask myself when photographing someone, with the secret desire that their gaze is meant for me."

Jakubek says, "I’m not typically someone to ask about what kind of camera was used but I think in this situation, the gear might matter. With that question, do you think that that affected the interaction between you and your subject?"

Caster says, "I shot this diptych and most of my recent work with a medium format film camera.  This was new for me, and there's an awkward clumsiness that mimics me directing on the shoots.  Using different technology that I was unfamiliar with made me nervous, the same nervous excitement that comes when photographing someone, asking them to do something for a photograph, asking a guy to take his shirt off.  The process of not seeing what you’ve photographed, waiting for the images to be developed, hoping you've pleased yourself, for me, feels more like what it is to be alone with someone, making photographs of them."

Jakubek says, "What was the editing process in selecting these two frames? Was the intention always to create a diptych?"

Caster says, "The intention was not to create a diptych at first, but after seeing these two expressions, I knew they had to be together.  I thought this diptych looked like something in between a kiss and a fight, is he stepping up to punch you in the face, or is a moment before passionate intimacy? The two images are so similar, but not the same, and I wanted to be a little rebellious in photographs heavy nature of choice (to choose what the “best” singular shot is).  Two images that look so similar, and that are so close to one another, almost want to come together themselves, and have an intimate touch, very similar to the way I'm separated from my models by my camera, never truly able to come together."

More about Joseph Caster's work:
Joseph Caster says, "Most of my practice is about men, how I experience them, and trying to get closer, getting more intimate.  Through my photographs, I try to achieve an intimate closeness with the men I meet (whether rarely by actual touch, or an implied relationship through the camera), questioning who the performance of "modeling" is for?  Is it for me?  Is it for an audience?  The desperate desire I have for it to be me is what sustains.  The camera is something that mediates me, something I can hide behind, to divert my embarrassed gaze.

Even when I enter the photo, through self-portrait with my model and friend, I get physically close but break intimacy due to the fact that my camera has to be advanced.  I can never really get too close.  I want to create photographs that exist in a space in between, something both intimate and sexually charged.  The expression of male relationships contains many layers, and for me, the layers shift in and out of questioning what I want? Romantic desire, brotherly comradery, or both?"

Joseph (Joe) Caster (b. 1996) is a visual artist primarily using the medium of photography.  He received his B.F.A in Photography from Rhode Island College and is currently attending the University of Connecticut for his Master’s of Fine Art.
In his artwork, he is interested in themes of youth culture, homoeroticism, identity, sexuality, and intimacy.  He creates work pertaining to human relationships, gender tropes and the line between playfulness and provocation.  His work ultimately discusses the insecurities of male relationships, thus exposing the fragility of masculinity.

2019, Being Without Being, Co-curated by Shadia Heenan and Christopher Platts, Alexey Von Schlippe Gallery, Groton CT