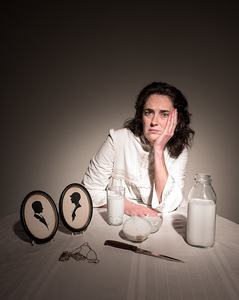 Review by curator Jerry Russo: "Every picture tells a story and every click of the shutter captures a moment in time that is unique unto itself. Even though Corn Wagon Thunder's headshots feel personal to the photographer we are free to construct our own narratives.

This self portrait, selfie however you want to call this challenge the notion of female identity. Feminist theory does revolve around this work. One feels everything from gender identity, rapture, nightmare, to that little girl who plays dress up in front of her mothers mirror.

This image held my gaze the longest. You made me look.

Do you feel your work participates in a particular mode of performative artistic production?"

Corn Wagon Thunder says, "The type of photography that I engage in is often described in cinematic terminology and as a performative act.

The emphasis on pre-visualization, the imaginative period before the moment of exposure, associated most closely with Ansel Adams, is an important aspect of my work and my practice involves a great deal of pre-planning.

There are many unseen actions that go into creating the final image. I am the writer, actor, set designer, camera woman, producer, and director all wrapped up in one. I start with an idea or theme—I think a lot about symbolism, so I might pick an object and a color scheme and build on that. In the process of doing research, acquiring props, designing the set, getting dressed, setting up the camera, and, finally, running back and forth to press the shutter button a hundred times, my ideas evolve into an image that comes close to capturing my unique vision.

With that said, one of the attributes of photographic self-portraiture that I find appealing is that in the final image, I am removed from being behind the camera and the viewer is placed there instead.

One might hire a professional photographer to make the photo, or perhaps ask a stranger to take the photo as Nikki S. Lee did in her “Projects” series, or maybe the artist makes it evident that they are in control of the shutter by including the evidence of the apparatus in the photo such as Tseng Kwon Chi did in his “East Meets West” series.

Since it is important for me to be alone when I am creating my work, I opt for the remote electronic shutter release. I choose not to have that be evident in the work because I want to create a separation between the image and the act – whether that be the performative act or the photographic act."

Russo asks, "Was either Cindy Sherman or Ralph Eugene Meatyard an inspiration for your headshots?"

Corn Wagon Thunder says, "I often find inspiration in films. With regard to the Headshots series there are two films from which I have drawn inspiration: George Romero’s 1969 zombie classic Night of the Living Dead and Věra Chytilová’s 1966 Czech New Wave classic, Daisies.

In Romero’s film the dreaded zombies can only be stopped by killing the brain. This is most often accomplished by inflicting a gunshot to the head of a zombie. This got me thinking about the idea of “headshot” in the photographic sense, and the role of photography in defining a professional identity. I purchased an old zombie mask and made a portrait of myself wearing it. The result was somewhat absurd, and I really liked it. Channeling the wacky sensibilities of the two female characters in Daisies, I set out on a new line of work in a series called “Headshots.”

This new series is about the idea of character, as in a theatrical character as well as moral character, envisioned through caricature. The famed theatre practitioner, Konstantin Stanislavski, speaks about characterization as “the mask that hides the actor-individual. Protected by it he can lay bare his soul down to the last intimate detail.” I am getting at the idea that the self and our perceived character attributes are an ambiguous notion.

Sherri Levine talks about being divided into two halves, her original (perhaps authentic) self being the one that maintains distance from the world and the second self being the one that interacts with the world and is prepared for all if its inherent absurdities and cruelties—the one that we crouch behind as though it were a shield. I am thinking about what happens when these two selves cross those self-defined boundaries. I am thinking about how many times I’ve heard it said that as you age you stop caring about what other people think about you and how that alludes to visual perceptions of physical appearance.
In the series, I also capitalize on the abundant thinking about masks resulting from the current global health crisis.

The images that I am creating are self-portraits in which I am costumed in a way that conceals some part of my head, often obstructing sight or in turn highlighting it. I am using gag props or comedic tropes. Some of the portraits are austere and some are ridiculous. Some are pastiche. In his 1972 lecture to the Midwest Society for Photographic Education Ralph Eugene Meatyard said, “The mask is no man. Everybody has a mask on.

A mask is a vehicle for transformation. A masked individual exudes a sense of mystery and presence. The masked individual is a character whose actions are up for interpretation. What revelation comes through unveiling? Is there kinship to be found in the mask itself?"

Corn Wagon Thunder says, "This body of work investigates my journey to becoming a middle-aged woman. And about the loss of my mother. At the time, I was quite shocked at how little I knew about what to expect from the transitional life phase called perimenopause.

Much like puberty, it is not only a corporeal experience but also an experience of the mind and spirit. I found myself missing my mother’s love more than ever.

This project was a way to have a conversation with her, to envision her experience and to imagine what guidance she might offer me. It was also a way to reflect on my childhood and my perceptions of the way the women in my life were during that time. To imagine the lives in which they may have felt captive. This was the late 70s and 80s. I was raised in a conservative Christian household in the rural south where there were clear notions of what was and was not proper in and out of the home.

Within this body of work there is a series of photographs that picture me seated at a table. These photographs reference Matryoshkas—Russian nesting dolls—the women we carry within us: the women of our past, our ancestors, as well as all our possible identities, all we are and all we can become. The tablecloth and housecoat are important symbols that speak to a certain type of domesticity and the idea that the home is a stage to be readied for company, for someone else’s viewing.

Everything must appear to be in order. The tablecloth covers, protects, and hides. The tidy housecoat speaks to propriety in the home and buttoned up sexuality."

Bio: Corn Wagon Thunder is a photographer and collage artist residing in the Southwestern United States, where she is currently pursuing a Master of Fine Arts degree at the University of New Mexico. Corn received her Bachelor of Fine Arts from the School of the Museum of Fine Arts, Boston, in conjunction with Tufts University, and has also studied at Penland School of Craft in North Carolina.

Career Highlights: Corn was invited to participate in the Asheville Art Museum’s 2019 exhibition Appalachia Now! An Interdisciplinary Survey of Contemporary Art in Southern Appalachia. Her series To Be & Become is currently on view at the Turchin Center for Visual Arts at Appalachian State University in Boone, North Carolina.