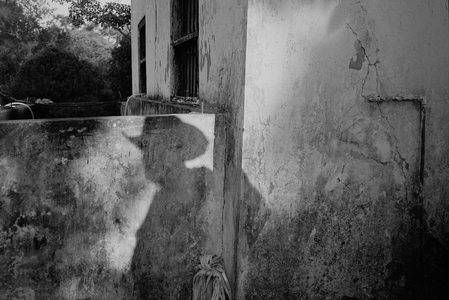 LA SOMBRA by Sylvia de Swaan
Taken at a ranch in Ozuluama, Veracruz, belonging to members of my extended Mexican family.
FIRST PLACE
(Click on image for larger view)

Review by Curator Sandrine Hermand-Grisel: "As always choosing one winner out of many great images is difficult. But I choose "La Sombra" by Sylvia de Swaan as I feel the image expresses really well the theme "The Poetry of Shadows". The subject of Sylvia's photograph is a shadow. It is at the same time literal, the shadow of a man, and somewhat metaphorical, referring to the past of this old house and the people who lived in it. The contrast of her black and whites are inviting and at the same time they indicate a loss, a nostalgia.  I was seduced by her aesthetic choices and poetry."

Curator Sandrine Hermand-Grisel asks the following questions, "What is the story behind that photograph?, What message would you like it to convey?"
Sylvia de Swaan says, "It was my brother-in-law's 70th birthday on Ocober 16, 2010 to be celebrated at his ranch in the north of Veracruz. This was at the height of the drug wars when people told stories of brutal murders, of having seen corpses hanging from the underpass on the road to Tampico. Nevertheless, undaunted a wild celebration took place at his ranch with local musicians and plenty of alcohol that went late into the night.
My photograph, titled "La Sombra" (The Shadow) was meant to convey the endemic mystery and magic that comes through in ordinary life in Mexico, to be my answer to Sandrine's second question - or to cite an apocriphal quote by André Breton, that 'Mexico never had a surrealist movement because the whole is surreal.' "
More about Sylvia de Swaan:
Sylvia de Swaan says, "I'm a fine art and documentary photographer who has lived and worked in Mexico, Europe and the United States. I was born in Romania, immigrated to the U.S. with my mother and sister at age nine and in the post communist era have traveled extensively through the countries of Eastern Europe that we traversed as stateless refugees.

My work has been exhibited and published regionally and internationally and been awarded fellowships and grants from the New York Foundation for the Arts, Arts Link, Art Matters, Aarons Siskind foundations, Austrian Ministry of Culture, Anderson Ranch Art Center, Bemis Center for the Arts and The Society for Photographic Education.

Along with my personal work I have taught photography at Hamilton College and Pratt Insitute and for sixteen years was the founding Executive Director Sculpture Space, an international residency program located in Utica, NY
I work on long term self assigned projects to explore issues of individual and collective memory and identity, the state of the world and the places where I live. My longest running bodies of work are "Return: The Landscape of Memory"; "Mexico, Sacred and Profane"; "Where Will You Spend Eternity" set in Upstate New York and "Sub-Version," about our world post 9/11."
http://www.sylviadeswaan.com/